Facebook users in India can now lock their profiles

Online trolls and abusers may not find the going easy on popular social media platforms. Twitter is testing out a feature that allows users to decide who can reply to their tweets.

And the other social media biggie Facebook has rolled out a new safety feature in India that will allow users to lock their profiles from their non-friends.

This feature will particularly help many women who find their posts and pics zoomed into or downloaded by online malcontents.

"We are deeply aware of the concerns people in India, particularly women, have about protecting their online profile. Today, we are announcing a new feature which, in one easy step, will give people a lot more control, ensure their privacy and keep them safe and secure online," Ankhi Das, Public Policy Director, Facebook India, said in a press release.

To enable the feature, a user has to tap ‘More’ under their name on Facebook profile then select ‘Lock Profile’ and tap again to confirm.

The new feature is similar to the Profile Picture Guard, which as the name suggests prevented profile pics from being wrongly used. 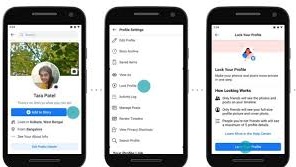 Facebook Product Manager Roxna Irani has been quoted by the Indian Express as saying: “We started first with the profile, because that was the picture that women were most nervous about being downloaded and shared. And so that’s when we first launched profile picture guard. And then over time, we realised it extends beyond the current profile picture to other photos as well.”  So the new roll out.

A blue badge will show that the profile is locked.